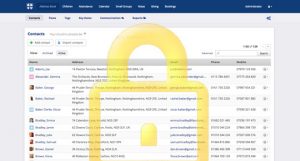 Amazon's UK AWS cloud platform, with multiple links directly to the backbone of the UK's internet infrastructure, ChurchSuite is available when you need it, whenever you need it.

With SSL encryption, encryption at rest and state-of-the-art physical security at our data centres, ChurchSuite keeps your data locked away from prying eyes. All data is encrypted at rest.

ChurchSuite email support is provided by the same team of developers that built it, meaning you're guaranteed to be helped by one of our team of experts, every time.

In order to ensure your ChurchSuite data is 100% safe, dual backups are performed on a daily basis to separate physical servers in different locations across the UK.

ChurchSuite builds on years of experience with web applications and runs on modern, high-capacity hardware, ensuring peak performance for all your users.

How can you be sure ChurchSuite is 'reliable'?

How are you able to keep ChurchSuite 'secure'?

All of ChurchSuite uses SSL encryption, meaning that all the data passing between your computer and our servers does so using 256-bit military grade encryption, making it nearly impossible for anyone else to see what you're sending. SSL is an industry standard technology and one you're probably familiar with if you use online banking; it's the same technology used by all the major UK and international banks.

In addition to this, all of our servers are UK-based and hosted on Amazon's AWS cloud platform - one of the UK's leading data centre providers. Amongst other certifications, each AWS data centre has achieved ISO 27001 certification, which aims at reducing the risk of breaches in the confidentiality, integrity or availability of data to a minimum.

On top of this, we've implemented a number of procedures and used a variety of technologies to help ensure that ChurchSuite is as secure as possible:

The data centre used by ChurchSuite uses state-of-the-art security and meets some of the strictest of industry security requirements in order to have achieved ISO 27001 certification. Add to that our dual backup procedure to multiple locations, where data is encrypted at rest, and you can be assured your data is in good hands.

All data on the servers is encrypted at rest and server access is limited to only ChurchSuite employees - we never give our server passwords to anyone else. We also use dedicated hardware or exclusive-access virtual machines, and therefore no one else even comes close to your data.

What do you mean when you say 'backups'?

A backup is a copy of the data within your ChurchSuite account, and is taken in case of a catastrophic hardware failure or natural disaster (both of which are highly unlikely but we believe it pays to be prepared for the worst). Your ChurchSuite account is backed up in three separate ways:

We retain a rolling 30 day backup cycle, which exceeds the industry standard of just 7 days.