My ChurchSuite gets even better
We're thrilled to announce a major refresh of the My ChurchSuite user interface, along with some new functionality we've been able to add. We've dedicated significant development time to this and hope you're going to love it! 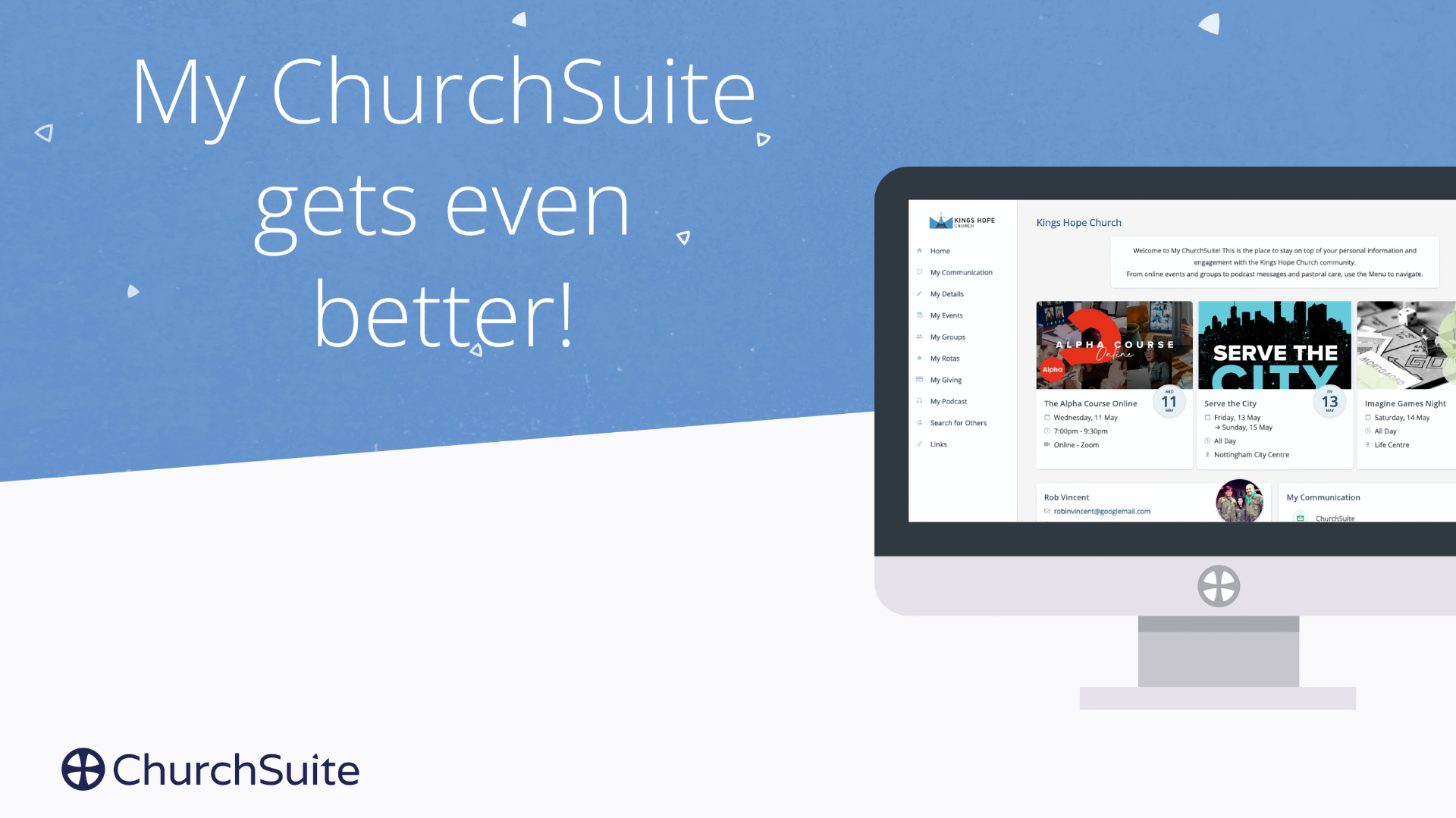 Hundreds of thousands of church members rely on My ChurchSuite to stay connected to their churches. My ChurchSuite can make a huge difference to your church:

As a church member, it can be incredibly useful being able to:

Leaders in your church will appreciate being able to

And your church office will love the fact that your members are able to keep their own details up to date!

Today, we're thrilled to announce a major refresh of the My ChurchSuite user interface, along with some new functionality we've been able to add. We've dedicated significant development time to  this and hope you're going to love it!

We've upgraded the user interface and introduced a fresh, clean, friendly, uncluttered look that invites the user to engage. As you use My ChurchSuite you'll find that things feel more natural and obvious. This has implications beyond mere aesthetics: the relaxed, simple feel helps new users, or church members who may not be as comfortable with technology, to engage. It feels easier to use and it is easier to use!

Not only does My ChurchSuite look better, but we've also ensured that accessibility was front and centre in this redesign. We're aiming to make this as easy to use as possible for as many people as possible - we'd love every church member to be using My ChurchSuite!

In addition, we've had a particular focus on the experience on mobile phones. While My ChurchSuite works well on any device, the overwhelming majority of people use it on their phones. This is why we designed the interface in a way that makes actions and pop ups both more easily reachable as well as easier to use on mobile phones. One-handed use is now much more feasible, even on larger screen phones.

We were able to add some new features as well. One handy new feature is the ability of ministry overseers in the Rotas module to manage ministries through My ChurchSuite that don't have a rota. Previously the Teams page could only be accessed if there was a draft or published rota. This constraint has been removed and ministries without rotas are now listed, which means overseers can manage their ministry teams even if there's not a rota active.

Another new feature that we hope people will find useful is that the featured events widget at the top of the "Home" page and My Events page in My ChurchSuite has been reworked. While it previously showed the next three featured events, we've now turned it into a scrollable reel that highlights the next six weeks of featured events, all in a neat, left/right scrollable view.

Overall, we're pretty excited about the changes and very much hope you and your church members are going to find My ChurchSuite even more helpful, engaging, and a joy to use!